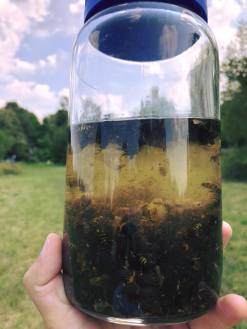 In May there is already a lot going on for our flying insects. The first butterflies fly around, bees hum and beetles, bugs and flies buzz on fields and meadows. Here are some selected results of the animals on our meadow in May 2018:

A total of nearly 300 known species with 493 different barcode index numbers (BINs) were found in Munich in May 2018. These were almost exclusively insects, but also three arachnid species (Arachnida), one springtail species (Collembola) and one isopod species (Malacostraca) was recorded. There was a huge variety of insects in the meadow already in May. Flies (Diptera, e.g., flies) and Hymenoptera (e.g., wasps and bees) were found, but also some butterflies (Lepidoptera), beetles (Coleoptera), and true bugs (Hemiptera, e.g., cicadas and bedbugs). In addition, two species of Psocodea and two types of cockroaches (Blattodea) could be detected. 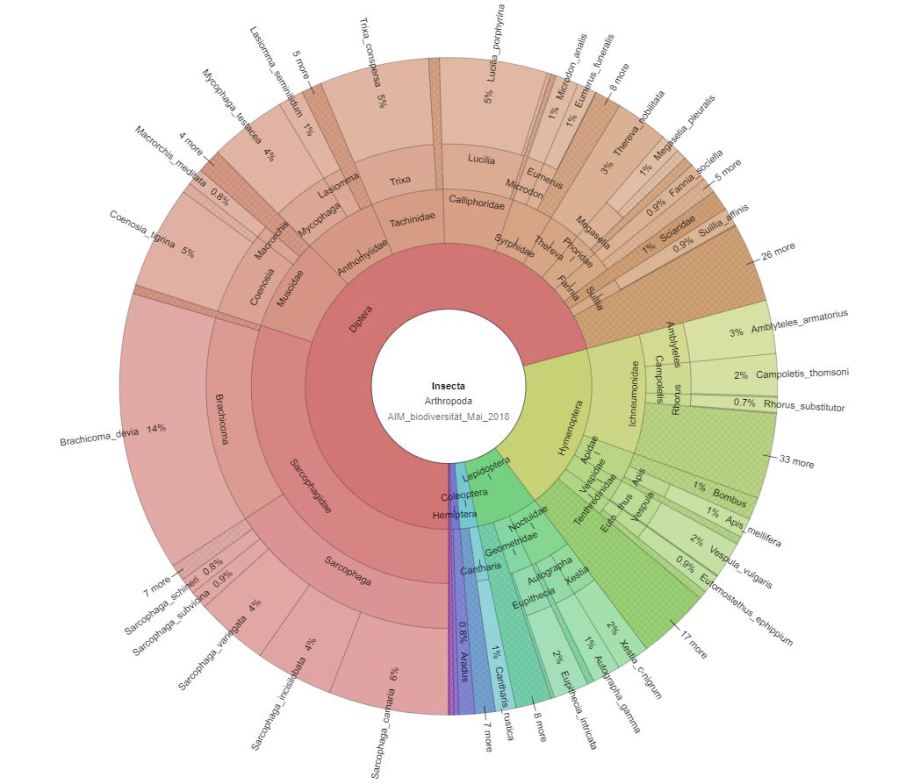 Here you can browse in more detail and download some of the data of our insect monitoring from May 2018:

Krona graph AIM biodiversity monitoring May 2018
In the interactive Krona graphs you can display the results and the percentage distribution of the sequences (reads) individually and for individual groups. With just one click, you can switch from the visual representation of the entire data to the focused representation of individual groups of animals.
AIM_biodiversität_Mai_2018.html
HTML Dokument [275.5 KB]

List of species May 2018
Detailed list of all species present in May 2018 on the meadows in front of the Bavarian State Collection of Zoology in Munich.
AIM biodiversity monitoring - List of sp[...]
Microsoft Excel-Dokument [23.4 KB]

The results show that in just one step of analysis DNA metabarcoding can quickly display a large proportion of the biodiversity in our immediate environment. Even in urban areas, as here on the grounds of the ZSM, an enormous diversity of species could be recorded. Now it is up to us humans to protect this diversity and to explore and contain the causes of decline!